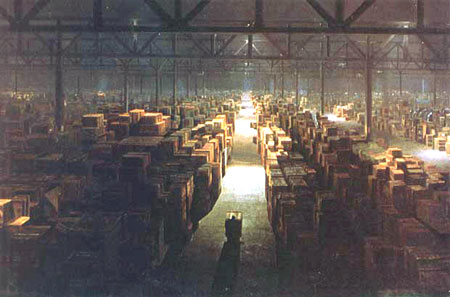 It’s rare that a warehouse becomes an integral part of a movie’s plot, as they usually only appear on the fringes. Regardless, warehouses appear in a surprisingly huge amount of movies, filling the screen with pallets, pallet trucks and tons more material handling equipment. One thing you may notice right off the bat with our list of the best warehouse movies below is just how much violence occurs in warehouses in the movies.

The first Indiana Jones movie and probably the most famous (see screenshot above) warehouse scene in movie history. The Ark is hidden away in an endless warehouse full of boxes and pallets to keep its powers from being unleashed.

The Oscar winning picture features a few scenes with the A-list cast surrounded by shelves of boxes and pallets.

Matthew Vaughn, the director of both films, sure does love violence in warehouses!

Sylvester Stallone stars in a movie about Teamsters in the 1930s.

A group of five men (common supporting actors like Greg Kinnear, Jim Caviezal, Joe Pantoliano and Barry Pepper) wake up in an abandoned warehouse, drugged with no memory of who they really are.

In a welcome change from the other movies in the list, this low-key Adam Sandler comedy/art movie features a meek factory worker learning how to stand up for himself and find love.

An insane movie from the mind of the writer behind Being John Malkovich and Adaptation; the movie is about a man who tries to build a true-sized replica of New York inside a warehouse as part of a play. If you’re on the same wavelength as it though, it’s brilliant. 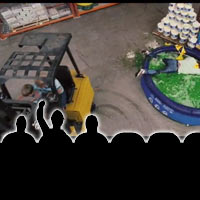 Blink and it’s Gone: Material Handling Equipment in Movies (and a weekend of 8/17 movie preview)

Bullet To The Head Movie Review – Is There Material Handling Equipment?